SiteGround is indeed a great web host which is why am quite sure you have already made up your mind to go with it. But I believe you are quite confused when it comes to which of SiteGround’s plan you need to choose based on your situation.

So, which SiteGround plan is right for you?

Don’t worry, we are here to clear your confusion! In this review on SiteGround StartUp vs GrowBig vs GoGeek Plan Comparison, we will be going through SiteGround’s 3 shared hosting plans in detail. We will review each SiteGround plan and further compare it with the other by conducting a comparison so that you get all the necessary information you require to eventually make the best possible decision.

SiteGround StartUp vs GrowBig vs GoGeek Plan Comparison
Which is the best SiteGround plan for WordPress hosting?

Here is a in-depth comparison which will help you in knowing the major differences between these three plans of SiteGround so that you can decide yourself which feature you need and which isn’t really needed at the moment.

Here’s how exactly this works with SiteGround plans so that you make the right decision based on the plan value and your budget before you even make a choice between StartUp, GrowBig and GoGeek.

SiteGround’s GrowBig and GoGeek plans generate the best results with the response time of both being decent even when they had to deal with 500 concurrent visitors at a time. If your website is big enough and also that popular, only then you can get up to 500 concurrent visitors all at the same time. Moreover, you weren’t likely to be on any kind of shared hosting plan with that much of traffic. But these two SiteGround plans (GrowBig and GoGeek) still delivered exceptionally well in such extreme conditions with an impressive response time as well.

Whereas, SiteGround’s Startup plan couldn’t be able to take more than 200 visitors at a time which is understandable as its their very basic plan. As a beginner, you might not think of getting that many concurrent visitors to your site but still you are better off going for SiteGround’s higher plans like GrowBig or Gogeek (just to be safe).

This remarkable feat of extraordinary uptime with any SiteGround plan which several other shared web hosts can only dream about is achieved especially via SiteGround’s proprietary options for multiple-power failure.

SiteGround promises special priority-based support for their GrowBig and GoGeek plans and is it even worth it? This is exactly what we will let you know by highlighting the key differences between SiteGround’s priority support and their very basic standard support system. Their live chat has more or less similar response time (regardless of the hosting plan you choose). This is why we decided to test their support ticketing system for more clarity.

With SiteGround’s StartUp plan, it will take you around 10 to 15 minutes for the first reply from SiteGround team with your issue usually getting solved within an hour. However, this response time for SiteGround’s StartUp account customers may vary slightly depending on the type of issue you are facing.

Meanwhile, SiteGround’s GrowBig and GoGeek plans took just around 5 minutes for the initial reply from SiteGround support team which is lightning fast and very impressive! You can expect your issue to get solved within half an hour in most of the cases which is much faster when compared to any other web hosting companies including their own standard support service for the StartUp plan.

Therefore, SiteGround’s priority support that comes with their GrowBig and GoGeek plans is twice as fast as their very basic standard support provided included with the StartUp hosting package.

SiteGround StartUp or GrowBig or GoGeek Plan Review
Which is the right SiteGround plan for you?

SiteGround’s 3 popular shared hosting packages by far outperform their competition with ease. GoGeek is SiteGround’s most powerful plan when it comes to the shared hosting market. Even if the initial prices may sound attractive but later the renewals could get quite expensive which is why you need to consider a SiteGround plan based on your particular situation, needs, and budget.

If you are a beginner or have a site with a few thousand visitors each month, then SiteGround’s Startup plan is sufficient enough for your needs. However, if you require excellent speed and better performance (that too on a budget), then SiteGround’s GrowBig is the best option without any doubt!

The key feature of SiteGround’s higher-end plan GoGeek is their Staging option that allows you to simply test design/code without even affecting your main website. Also, the backups on-demand feature coupled with a low number of hosting accounts included on the GoGeek server makes it a powerful plan of the lot. SiteGround’s GrowBig is also a powerful plan lacking a few of the advanced GoGeek features mentioned above which aren’t really needed during the beginner stages.

Lastly, you have to ask yourself whether you need these extra features or not as they will additionally cost you around $100 yearly. I hope this review on SiteGround Startup vs GrowBig vs GoGeek Plan Comparison (2020) was helpful to you in finally choosing the right plan for you! 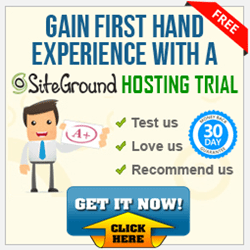 Disclosure: We receive compensation if you decide to purchase via our referral link with no expense to you. Thanks for your support!

SiteSource101 aims at informing and educating the visitors about the do's and dont's of web hosting to recommend them the most reliable and affordable web hosting companies and packages. Our beginner guides to the world of blogging will make the life of the bloggers better and hassle-free.
Copyright 2020 © SiteSource101.com | All Rights Reserved
Hosted with love by SiteGround

FTC Disclosure: SiteSource101 takes great efforts to maintain reliable data on all the presented offers but the data provided comes without warranty! It is advisable to our users to always check the official website of the offer provider/company for the current terms, conditions, and details. SiteSource101 receives compensation from many of the offers that are listed on the website with no expense to you. Our website doesn't include the entire universe of offers available as we only recommend the services that we personally use. Editorial opinions expressed on SiteSource101 are strictly our own and aren't endorsed by any offer provider.