BlueHost server performance is exceptional despite the outrages reported back in early 2013 after which they have improved a lot in terms of service quality and server uptime which is why they keep getting recommended by WordPress.

You can hardly find any information about Bluehost data centers if you go through their official website. That doesn’t mean they only have a single data center worldwide. In fact, Bluehost’s data centers are located globally in order to offer interrupted, reliable and faster web hosting services to their customers worldwide.

Bluehost is owned by EIG Company but its servers haven’t been moved to any other EIG owned data centers or there are any reports of converged server infrastructure. Thus, if you open an account with Bluehost, your websites will be hosted with them and won’t be converged with the data centers of other sister companies of Bluehost.

However, EIG announced sometime back that the Bluehost Billing, Sales & Support departments which were previously located at Orem, Utah, USA will get shifted to Arizona, USA and also the employees working at Orem may get laid off. So, depending on how EIG and Bluehost continue to go forward from here, it’s very much possible that Bluehost management may either decide to move their data center to Tempe, Arizona, USA or would just add just another server location to strengthen its presence in the North American continent.

Where Are The Bluehost Servers Located Around The World? 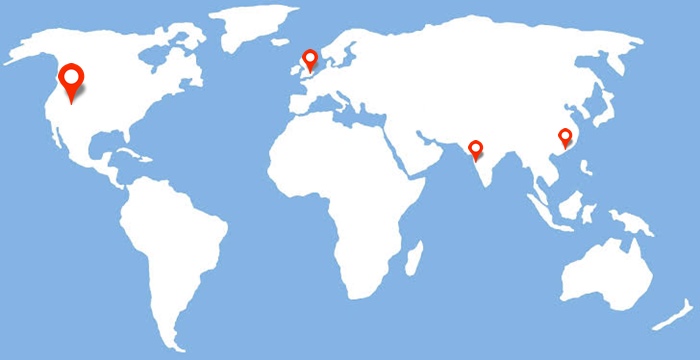 Bluehost hasn’t mentioned anything about their server locations anywhere across their website. However, the most popular ones including the primary and the secondary Bluehost data centers are located in the US. It is believed that Bluehost has 6 data centers located worldwide which greatly helps its clients in targeting global visitors.

Here is the list of Bluehost data centers and global server locations as per our research and findings:

Bluehost’s main US hosting operations are focussed and located at their Unified Layer servers in Provo, Utah, USA server location which is considered as the primary US Data Center for a Bluehost powered website targeting global visitors with its name server being ns1.bluehost.com (IP Address: 162.88.60.37).

The Orem, Utah, USA server location is the second US data center of Bluehost which also considered as the secondary Data Center at their Unified Layer servers with its name server being ns2.bluehost.com (IP Address: 162.88.61.37).

In collaboration with its parent company EIG and the Mumbai based company ResellerClub India, Bluehost brings web hosting services to their Indian customers with an Indian server availability. The Mumbai data center is available via bluehost.in website for Indian as well as the neighboring Asian clients of Bluehost for redundant connections especially throughout India.

Just like the Indian site, Bluehost has a UK based website especially to target the UK and the neighboring European clients. Hence, they have a London Data Center which is the best for UK based and European countries for lower latency.

There are 2 separate Chinese divisions of Bluehost China namely, cn.bluehost.com (available in both English & Chinese languages) and bluehost.cn (connected to China Unicom & Telecom). The cn.bluehost.com website mainly targets the China-based customers who wish to expand mainly via the Hong Kong route for a better connection to Mainland China and beyond (hosted at the Telehouse data center).

The second Chinese division of Bluehost (bluehost.cn) is only available in the native Chinese language which is aimed to target the mainland China in order to deploy low latency and providing stable redundant web hosting to local Mainland China customers via high-speed Shanghai data center in association with Shanghai Blue Network Technology Co Ltd.

NOTE: Bluehost also has a Brazil website and an Australian website for targeting local Brazilian and Australian visitors respectively. However, not much is known whether Bluehost has separate data centers located in Brazil and Australia. If you are more concerned about the latency issue, using a CDN service available free from Bluehost via Cloudflare on their US-based servers is advised.

Why is Bluehost not disclosing their server locations?

There could be a number of reasons why Bluehost is extra careful and secretive about the location of their servers. Here are the key possible reasons for not disclosing their server location:

1. Bluehost is obviously a huge company that makes use of different data centers in order to utilize its optimized infrastructure worldwide. Especially after being acquired by EIG, Bluehost have broadened their collaboration with several other web hosting companies and data centers across the globe so that they would be able to look out for optimal business server hosting solutions which will indirectly help them in growing their operations globally.
2. Bluehost doesn’t want to offer their customers an option to directly choose the data center of their choice as they are very much worried about maintaining the privacy of their data center locations.
3. Another key reason is the server security concerns that Bluehost is very much conscious about. Bluehost servers were once hacked by a group of hackers years back and after this, they simply prefer to safeguard their data center related information and keep it confidential as it is crucial and directly connected with their client base.

How do I choose the best Bluehost Data Center for my website or blog?

You don’t have to choose any Bluehost data center as they will automatically allocate the best data center/server location as per your geographical location and optimize it for their clients.

FOR EXAMPLE: If you decide to target the UK visitors with your Bluehost powered site, you can visit their UK website and get a London, UK Data Center. Furthermore, you can configure the Bluehost Cloudflare CDN service which is offered free of cost in order to improve the site load time globally.

I hope our review on Bluehost Server Locations and Data Centers (2021) was useful to you!

FTC Disclosure: We receive compensation if you decide to purchase via our referral link from Bluehost or other web hosts with no expense to you! That’s exactly how we are able to maintain our website and review/recommend the hosts that we personally use. It doesn’t cost you anything and we try our best to offer exclusive discounts and deals to our readers. Thanks for your support!

FTC Disclosure: We receive compensation if you decide to purchase via our referral link from Bluehost or other web hosts with no expense to you. Thanks for your support!

SiteSource101 aims at informing and educating the visitors about the do's and dont's of web hosting to recommend them the most reliable and affordable web hosting companies and packages. Our beginner guides to the world of blogging will make the life of the bloggers better and hassle-free.
Copyright 2020 © SiteSource101.com | All Rights Reserved


FTC Disclosure: SiteSource101 takes great efforts to maintain reliable data on all the presented offers but the data provided comes without warranty! It is advisable for our users to always check the official website of the offer provider/company for the current terms, conditions, and details. SiteSource101 receives compensation from many of the offers that are listed on the website with no expense to you. Our website doesn't include the entire universe of offers available as we only recommend the services that we personally use. Editorial opinions expressed on SiteSource101 are strictly our own and aren't endorsed by any offer provider.